Insulin resistance is a subnormal biological response of the body to insulin, i.e. a reduced response to the presence of insulin. As a result insulin becomes less effective at reducing blood sugar, increased blood sugar levels can have an adverse impact on health. Defects in either the secretion of insulin or the action of insulin can cause diabetes mellitus.

The human insulin receptor (HIR) is a transmembrane receptor which becomes activated when insulin binds to its active site. The HIR belongs to a class of tyrosine kinase receptors, such receptors mediate their activity by adding phosphate groups to tyrosines within the cell. The tyrosine-containing-protein substrates which are phosphorylated by HIR are known as insulin receptor substrates (IRS).

The receptor gene is located on chromosome 19. It is a relatively large gene, consisting of around 120,000 base pairs of DNA. Within this, 22 coding exons exist. The receptor is made up from α and β subunits, 11 exons encode for each subunit, however the exons encoding the α subunit are much more dispersed requiring around 90,000 base pairs (75% of the total number of base pairs).

The α-subunit consists of 731 amino acids and has a molecular weight of 135,000 Da. It is located externally to the plasma membrane, this allows insulin to bind to the insulin binding region located within the subunit. It is linked to the β-subunit by disulphide bonds. 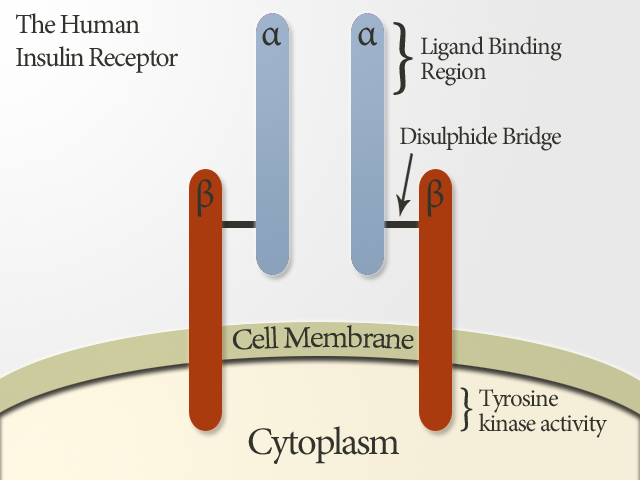 Mutations in the Insulin Receptor Gene

Multiple different mutations have been identified in the insulin receptor genes of patients with genetic syndromes associated with extreme insulin resistance. Some patients are homozygous for a single mutation whereas others are heterozygotes, having inherited different mutated alleles of the insulin receptor gene from each parent. Other patients, with less severe insulin resistance, appear to be heterozygotes with a mutation in one allele while the other allele appears to be normal.

Mutations which can give rise to insulin resistance fall into 5 different classes:

Targeted cell defects could also be due to mutations affecting any protein between the receptor and the final insulin regulated proteins.

To date, over 20 different receptor mutations have been identified in insulin resistant patients. Most of the mutations detected so far, are in the structural gene rather than in the promoter or other noncoding regions.

Some mutations are dominant-negative i.e. they impair the function of the receptor encoded by the normal allele. This relates to the fact that the receptor is an oligomeric protein (α2β2) that may contain products of both normal and mutant genes.

Methionine to Isoleucine at position 1153 in the β subunit

The mutation has been investigated by cloning and expression of the mutant receptor in NIH-3T3 cells. It impairs receptor tyrosine kinase activity and inhibits the ability of insulin to stimulate both the uptake of 2-deoxyglucose and the incorporation of thymidine into DNA. This mutation exerts a dominant negative effect i.e. the product of this mutant gene antagonises the normal wild type allele, this is characterised by observable dominant (or semi-dominant) phenotypes.

The presence of methionine at position 1153 is conserved in all sequence insulin receptors. It may be that mutation alters the conformation of the receptor in this region so that tyrosines at positions 1158, 1162 and 1163 are not available to be autophosphorylated i.e. the addition of a phosphate group to a protein kinase by its own enzymatic activity.

In cell transfectants (i.e. those with free nucleic acid) that express either of these mutations , there is no detectable insulin-stimulated receptor autophosphorylation or tyrosine kinase activity with either endogenous or exogenous substrates.

In addition, the cells showed no increase in the incorporation of thymidine into DNA (a measure of replication rate) or accumulation of glucose transport protein GLUT-1 mRNA (a measure of transcription rate).

Cells expressing the tryptophan to serine mutant receptor, show insulin dependent stimulation of the uptake of 2-deoxyglucose and glucose incorporation into glycogen. In contrast the alanine to threonine mutant receptors failed to signal these metabolic responses.

These results are important as they indicate a possible divergence of the insulin signalling pathway (both metabolic and mitogenic arms) may occur. Also, the activation of the receptor tyrosine kinase may not be necessary for certain biological actions.

Phenylalanine to Valine at position 382 of the α-subunit

The mutant receptor can still be phosphorylated by the wild type receptor i.e. transphosphorylation (the exchange of phosphate groups between organic phosphates)may occur.

Insulin Signalling Through the IRS1-PI3K-Akt Pathway

After binding to its receptor, insulin begins a signalling pathway. This is initiated by the binding of insulin which in turn stimulates tyrosine phosphorylation of both the β-subunit of the insulin receptor and IRS-1 (insulin receptor substrate 1). Their phosphorylation leads to the activation of PI3K (Phosphatidylinositol 3-kinase) and Akt (also known as protein kinase B).

There are several negative modulators (i.e. those which prevent transcription or translation) of insulin signalling which are believed to have key roles in human insulin resistance. One such modulator is the TRIB3, a protein kinase, which exerts its inhibitory effect by interacting with Akt (protein kinase B) and inhibiting phosphorylation.

One prevalent missense polymorphism of the TRIB3 protein is known as Q84R. Q84R is associated with several insulin resistance-related abnormalities. Its potential to affect insulin signalling makes Q84R a risk towards development of increased insulin resistance.

There is growing evidence that inflammatory processes are responsible for the insulin resistance associated with obesity.

Activation of TLRs leads to the induction and release of the inflammatory cytokines interleukin-6 (IL-6) and tumour necrosis factor-α (TNF-α).

Cytokine induction is dependent upon the nature of the dietary lipid:

In mice, lipid infusion activates TLR4 signalling and results in an inflammatory response. Furthermore, insulin resistance in muscles occurs – as measured by a decrease in IRS-1 phosphorylation.

Insulin resistance does not occur in response to lipid infusion in TLR4-deficient mice. Increased phosphorylation of the serine at position 307 (an indicator for insulin resistance) and decreased insulin-induced tyrosine phosphorylation of IRS-1 is observed in obese mice. The opposite is true for mice treated with TLR2 antisense oligonucleotides i.e. single strands of DNA or RNA, complementary to a chosen sequence, which prevent translation of certain mRNA strands by binding to them. Mutations in the TLR4 receptor may affect the susceptibility to insulin resistance.