Compared to other tissues, the brain is extremely dependent on a stable and efficient blood supply. Despite making up only 2% of total body mass, the brain requires 15-20% of total cardiac output; this makes the brain extremely sensitive to hypoxia. Any hypoxic damage caused to the brain becomes irreversible after only a few minutes.

In normal tissue, there are three typical forms of metabolites utilisable for energy, these include; glucose, fatty acids and ketone bodies. However, in the brain only glucose can be utilised, except under extreme conditions, such as starvation. During these harsh conditions for the brain, ketone bodies may be used for energy. Because of the brains dependence on glucose, hypoglycaemia will result in dizziness and confusion as the brain is starved of energy.

An overview of Trophic Support:

The Circle of Willis

There are 4 routes which blood can take to reach the Circle of Willis, these are:

Fig. 1 – The arterial supply to the Circle of Willis, the different routes all begin by flowing in through the aorta. 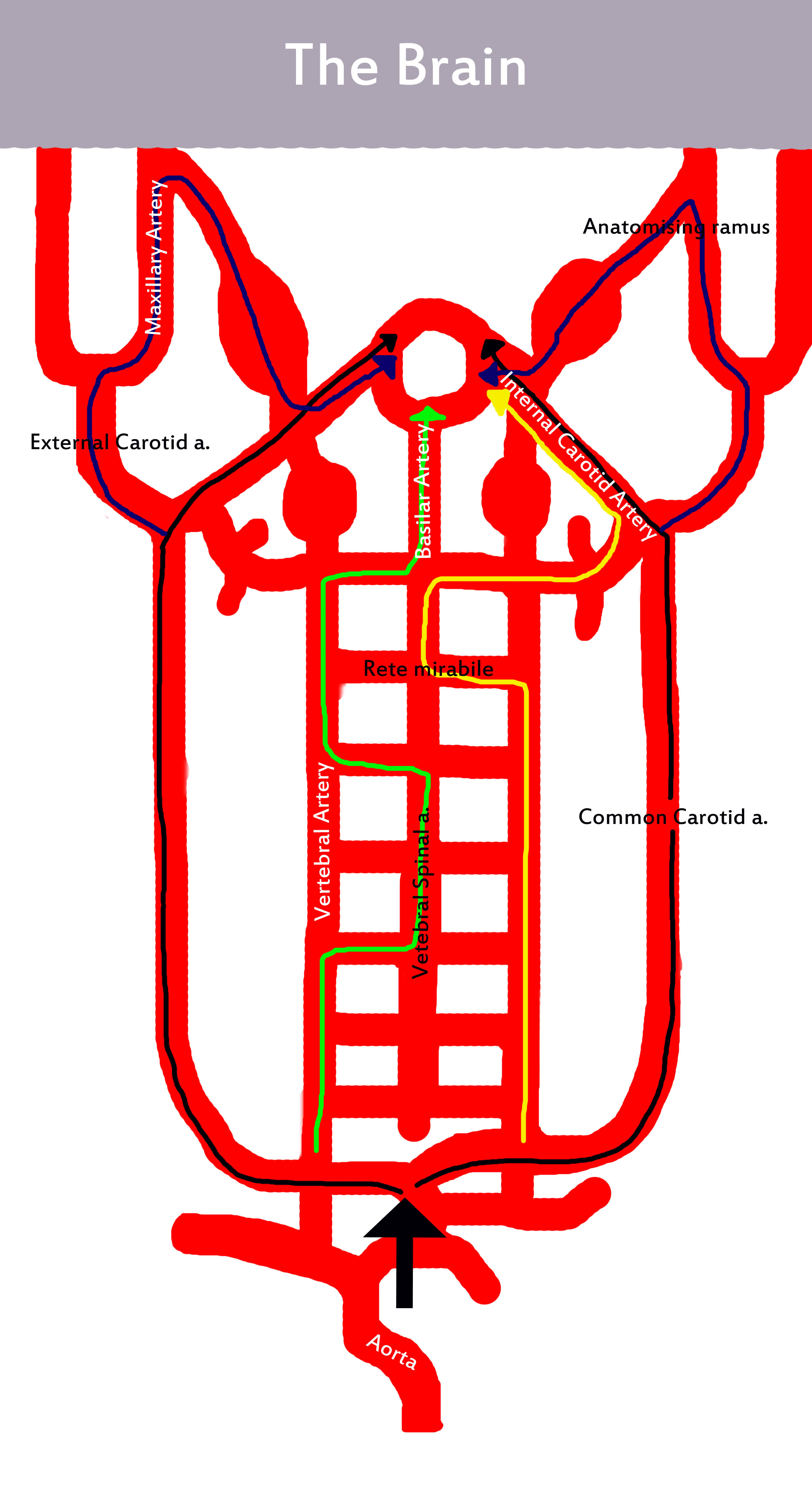 The routes are colour coded to correspond with the above four routes:

In effect there are only two final routes into the Circle of Willis, either:

At the Circle of Willis, the arteries anastamose (join together) to form a ring. 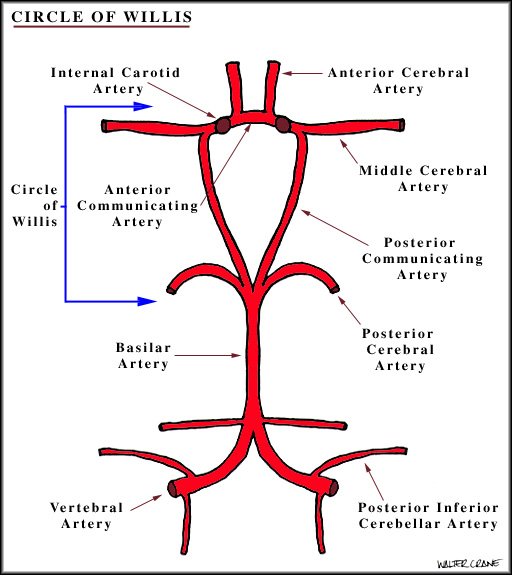 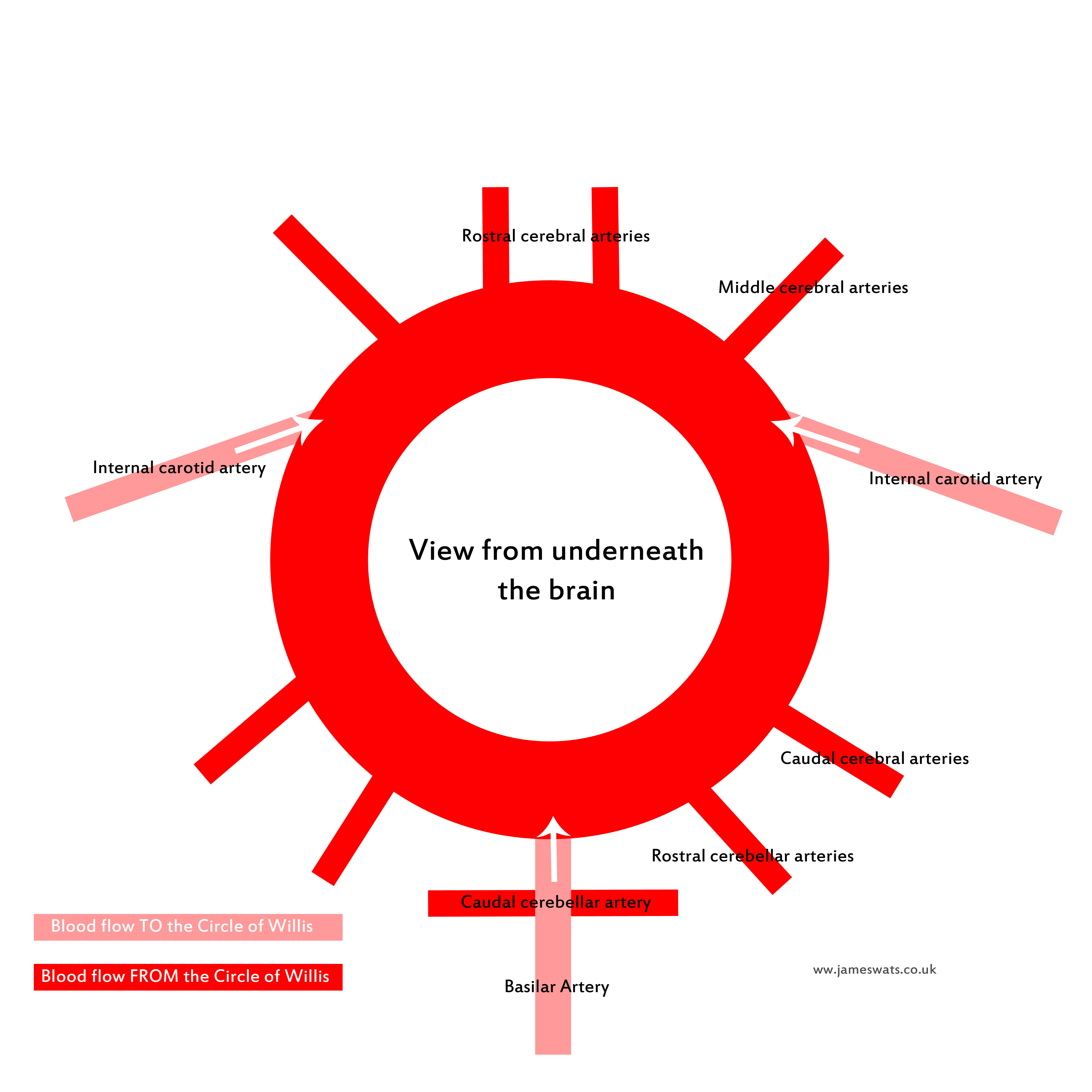 Blood Supply From the Circle of Willis

The blood from different arteries emerging from the Circle of Willis tend to supply different parts of the brain:

A rete mirabile is present in sheep, goats, swine, ox and dogs and is located in the venous cavernous sinus. The cat has a rete mirabile present also, however it is located extracranially. Retia Mirabilia are absent in the rat and rabbit.

Arterial Blood Supply to the Circle of Willis – Cats

Variation of the Circle of Willis

The Circle of Willis’ structure can differ between species; this has even been observed between different breeds of dogs. The typical example is that some dogs completely lack a rostral communicating cerebral artery altogether.

Supply of Arterial Blood to the Cortex

The route of supply of blood to the brain may also differ between species:

Arterial Supply to the Spinal Cord

Like the brain, the spinal cord requires an equally rich supply of arterial blood, the general arrangement:

Regulation of Arterial Blood Supply to the CNS

To protect the brain tissue, a blood-brain barrier is in place. This prevents unwanted substances crossing into brain tissue freely; certain transport systems are in place to selectively transport required substances.

In simple terms the brain capillaries are surrounded by ‘astrocyte feet’. These astrocytic feet serve to regulate the blood brain barrier in some way.

Differences between a regular capillary tissue boundary and the blood-brain barrier: