The meninges are a group of three membrane layers which wrap around the brain and central nervous system. The meninges consist of three layers (meninx), these include:

The primary function of these layers is to protect the central nervous system.

Fig. 1 The meninges surrounding the brain. Meninges of the spinal cord would have another layer between the periosteum and Dura mater – the epidural space and lack the bone layer (skull) 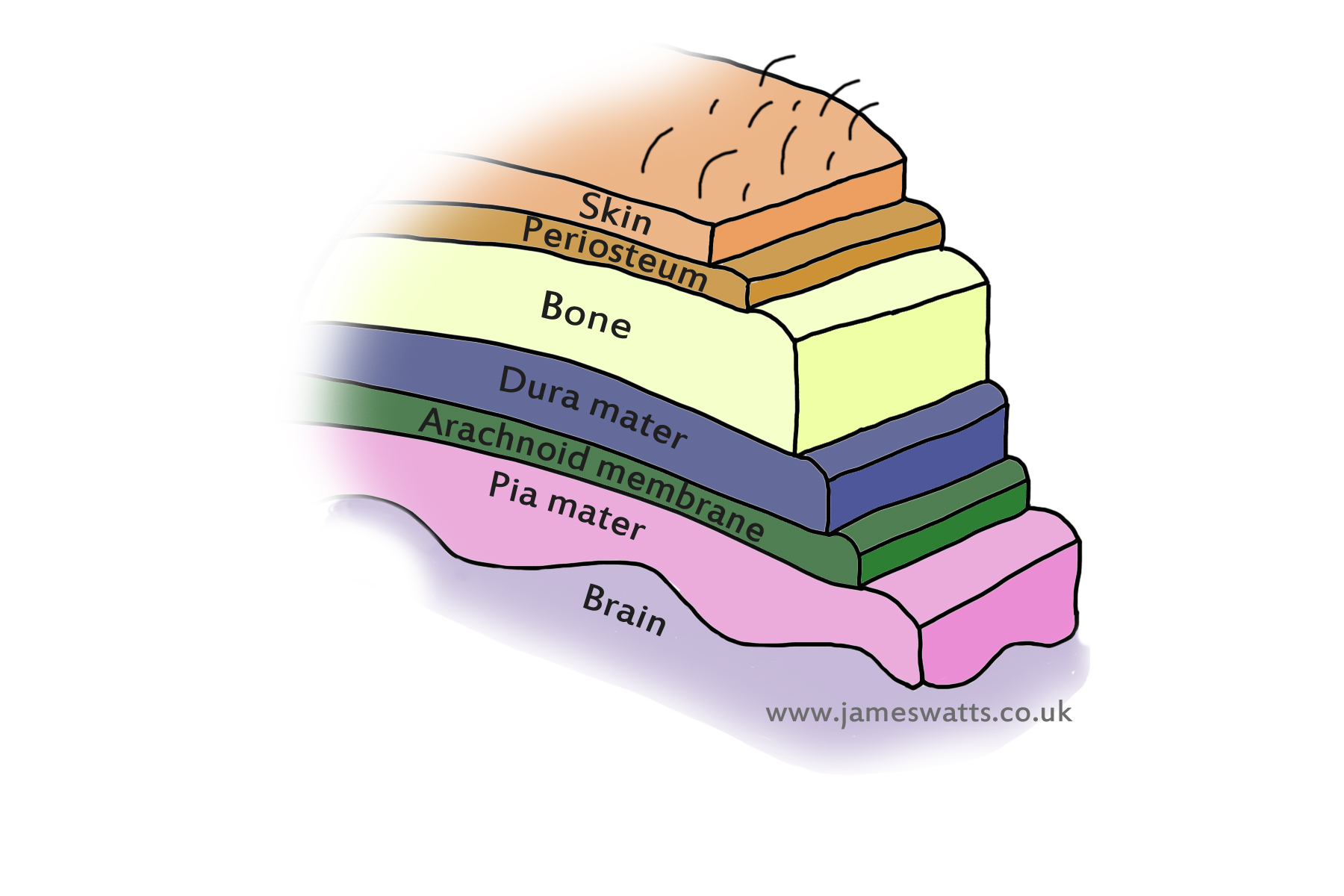 The outermost layer of the meninges and therefore closet to the skull is the Dura mater; it is a thick and tough layer composed of dense fibrous tissue which wraps almost entirely around the whole brain and spinal cord. There is little space between the Dura mater layer and the layer below/the bone above it, the exception to this is when (not in the meninges of the spinal cord) the Dura mater splits into two layers forming a gap between them, which is known as the venous sinus. The Dura contains larger blood vessels which split into the capillaries in the pia mater.

The arachnoid layer is much thinner than the Dura mater and contains a lot of underlying space which is filled with CSF (cerebrospinal fluid). This space is known as the subarachnoid space. The arachnoid space is so called because of its spider web-like appearance. It provides a cushioning effect for the central nervous system.

This is a very thin and delicate layer which intimately follows the surface of the brain and spinal cord. It is highly vascularised tissue and its capillaries are responsible for nourishing the brain.

Clinical Aspects of the Meninges

Cerebrospinal fluid (CSF) is a clear, saline bodily fluid that occupies the subarachnoid space and the ventricular system around and inside the brain. It is produced continuously at a steady rate and is essential for the normal functioning of the CNS. There is very little protein and virtually no cells present in normal CSF, only around 35mg per 100ml compared to 7,000mg per 100ml in typical serum. It is therefore a greater proportion of water (99%) compared to 93% in serum.

CSF is produced in the brain by modified ependymal cells in the vascular choroid plexus (approx. 50-70%), and the remainder is formed around blood vessels and along ventricular walls. Both filtration and secretion occurs by epithelial cells.

Generally CSF flows from the lateral ventricles, through the foramina of Monroe to the 3rd ventricle, then through the cerebral aqueduct (of Sylvius) to the 4th ventricle. It then mostly flows out of the lateral foramen of Luschka and into the cisterna magna (a dilation of the subarachnoid space), or caudally into the central canal of the spinal cord.

Generally CSF will exit via the arachnoid villi. There are other possible routes of drainage however; such as absorption by venules in the pia mater, through spinal veins and lymphatics (around the roots of the spinal nerves) and by direct venous drainage from the subarachnoid space into the venous sinuses.

CSF can be sampled from an organism by cisternal puncture. The CSF should flow into the container without the need to draw it in, due to pressure. No more than a maximum of 1ml per 5kg of body tissue should be extracted.

Things to look out for in the CSF sample include:

The brain and spinal cord use a series of dural sinuses, in addition to veins to remove CSF and venous blood. Dural sinuses have no valves, (the venous system of the cranium generally has few valves).

A similar system exists to drain venous blood from the spinal cord. There is a direct continuity with the cranial sinuses. CSF and venous blood drain via intervertebral veins into either the vertebral, azygos veins or the vena cava.