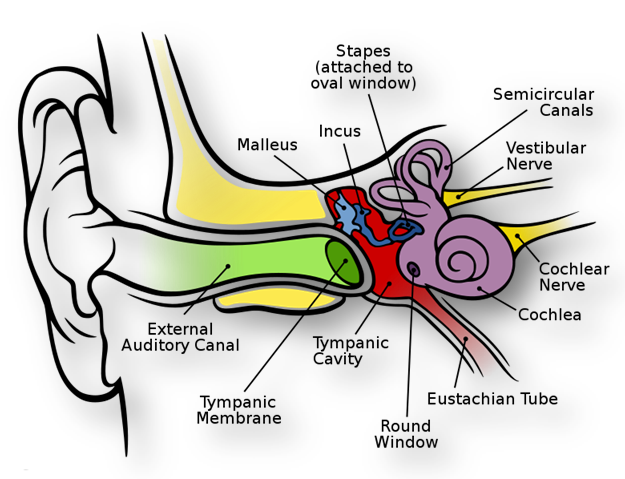 The ear is the organ of hearing (and balance). Specially adapted receptor cells located in the inner ear are able to react to sound waves. The ear can be divided into three main parts, these are:

The external ear can be further broken down into:

The middle ear can be further broken down into:

The inner ear can be further broken down into:

The cochlea (the spiral, snail shaped structure of the inner ear) is responsible for detecting sound and allowing it to be perceived with volume and frequency. The cochlea has two large perilymph filled canals, an upper and a lower canal, separated by a small endolymph filled cochlea duct which runs almost the entire length of the cochlea. The upper canal is known as the vestibular canal and the lower canal is known as the tympanic canal.

The ear is able to distinguish between different frequencies of sound. Similar to wavelengths of electromagnetic scale (e.g. visible light), sound waves also have different variations in frequencies. In terms of audible sounds, the lowest (infra) sound detectable is 10Hz (1Hz being one vibration a second). This is an infrasound meaning it is not detectable by humans. Elephants however are able to hear sounds at this very low frequency. On the opposite end of the scale (ultrasound), bats are able to hear sounds with as high a frequency as 100kHz. To put things in to perspective, a humans hearing range is 20Hz – 20kHz.

There are two problems with this however. It is difficult for the basilar membrane to vibrate at very low frequencies e.g. 10Hz, if the basilar membrane is not vibrating then the hairs do not detect movement and the nerves are not stimulated – no sound. On the opposite end of the scale, very high frequencies cause vibrations so fast the neurones are not able to generate action potentials fast enough to keep up.

A process called phase-locking helps to detect the lower frequencies. This is where groups of neurones instead of generating action potentials as normal, they generate them at the frequency of the sound wave. For example, a 60Hz sound wave will cause a group of neurones to fire 60 times in a second.

At higher frequencies, when the nerves simply cannot fire fast to phase lock (e.g. 100kHz) the brain is able to simply detect that the very thinnest part of the basilar membrane is vibrating and interpret this as a sound. This is known as tonotopy.

Volume is also determined by the hair cell mechanoreceptors. In terms of waves, a louder sound has greater amplitude (height) but the same frequency (cycles per second). This is mimicked along the basilar membrane of the cochlea, louder sounds cause greater vibration of the membrane – making it rise and fall with greater height.

The greater displacement of the membrane causes the hairs of the hair cells to brush against the tectorial membrane more vigorously. This generates more action potentials in the sensory neurones as the brain perceives a louder sound.

As you know, sound waves are ultimately detected by the hairs of the mechanoreceptor hair cells. The bending of the hairs must be converted into the generation of action potentials by sensory neurones which synapse with the hair cells before the information can be processed in the brain.

When a sound wave causes a certain part of the basilar membrane to vibrate (location depending on its frequency) the hairs bend against the tectorial membrane. As they bend mechanoreceptors cause ion channels in the hair cells to open/close depending on which direction they bend.

The initial direction of bending (stimulus applied) opens the ion channels causing an influx of ions and depolarisation of the mechanoreceptor. The depolarisation causes an increase in the amount of neurotransmitter released across the synapse with sensory neurone. This in turn increases the frequency at which the sensory neurones generate action potentials.

As the hairs bend the other way (stimulus removed), the ion channels close. The closure of the ion channels causes the hair cell to hyperpolarise. This reduces the amount of neurotransmitter released by the cell and the synapsing sensory neurone reduces the frequency at which action potentials are generated.

The auditory pathway shows how sound waves are eventually processed by the brain. So far we have discussed from the sound entering the cochlea (via the external auditory canal) to hair cells of the organ of Corti.

From the hair cells, the majority of information travels along large, fast, myelinated nerves. The axons of these nerves join together and form the auditory nerve (part of the vestibulocochlear nerve [VII]).

The auditory nerve initially travels through the cochlear nuclei; one nucleus located both dorsally and laterally. Information from either ear remains separate at this stage.

The lateral lemniscus is a tract of axons in the brainstem that carries information about sound from the cochlear nucleus to various brainstem nuclei and ultimately the inferior/caudal colliculus of the midbrain.

The inferior colliculus is the principal midbrain nucleus of the auditory pathway and receives input from several more peripheral brainstem nuclei in the auditory pathway, as well as inputs from the auditory cortex. It is here that sound location data from different areas becomes integrated, allowing sound direction/ distance to be interpreted.

Two ways in which sound location is distinguished include:

The Medial Geniculate Nucleus is part of the auditory thalamus and is what finally connects the inferior colliculus to the auditory cortex. It is involved in the tonotopic organisation of sound information, as well as the detection of relative intensity and duration of a sound.

The primary auditory cortex is the region of the brain that is responsible for processing of auditory information. It is located on the temporal lobe, and performs the basics of hearing; pitch and volume.

The auditory cortex is involved in tasks such as identifying and segregating auditory “objects” and identifying the location of a sound in space.

As you can see, hearing appears to be rather complicated process. So, whenever some problems with hearing occur, it is necessary to address real professionals like Tinnitus & Hearing Center of Arizona. Their goal is to ensure your hearing comfort and optimization.