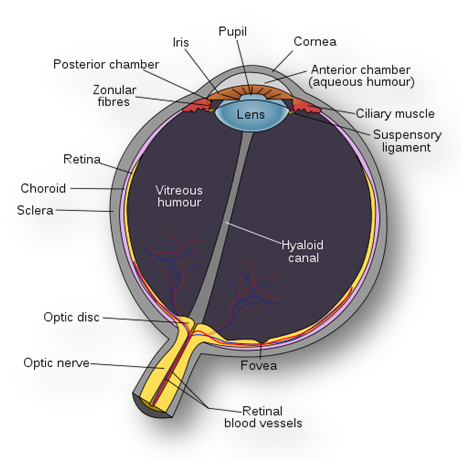 The eye is the organ of vision. The main cells responsible for beginning the process of converting light (of varying wavelengths) into an interpreted image we can ‘see’ are photoreceptors. These cells respond to the stimulus of light and are located in the innermost layer of the eye – the retina.

The eyeball itself can be split into three layers:

There are certain differences which are observed between different species, a few of these are listed below:

Diseases of the Retina

There are a many diseases which can affect the retina. Some common examples found in animals are:

As mention earlier, the photo receptor cells are rods and cones. Cones are associated with colour vision but are not sensitive in low light, whilst rods are – but they have low acuity and provide only black and white vision.

The initial steps for photoreceptors in perceiving light requires the use of a chemical called rhodopsin, found in rod cells it can be broken down into the protein opsin and a small molecule retinal (Derived from retinol – vitamin A). Rhodopsin is extremely sensitive to light, enabling vision in low-light conditions. When exposed to light, the pigment immediately photobleaches breaking down into opsin and retinal. The breakdown of rhodopsin causes a secondary messenger cascade (phototransduction) eventually resulting in the information reaching the visual cortex.

Similar to rod cells, cone cells contain a rhodopsin like pigment called iodopsin or photopsin. Just like rhodopsin, photopsin contains opsin and retinal except the opsin component varies slightly by a few amino acids. These slight changes allow them to absorb different wavelengths of light. In humans there are three extra opsins each tuned to different wavelengths:

The three colour photopsins work together in bright light, to give colour vision. Species which utilise:

In summary the differences between the two types of photoreceptor are:

Phototransduction covers the process of how the photoreceptors send information to the brain. The process is as follows:

Glutamate may act as either an excitatory or inhibitory molecule to the bipolar neurone which synapses with the rod. This gives rise to ‘on’ and ‘off’ bipolar cells.

The ‘on’ bipolar cells are activated by light – therefore glutamate was acting as an inhibitor as glutamates inhibition (caused by light hitting the rod) activates the bipolar cell.

The ‘off’ bipolar cells are deactivated by light – glutamate was therefore acting as an excitatory molecule. Light prevents glutamate being released which was stimulating the bipolar cell.

Ganglion cells only detect light from a region known as its receptive field. The receptive field is split into the field centre and the field surround. Basically forming two concentric circles, these circles representing regions at which light is detected.

With receptive fields alone, images would appear blurry. The process of lateral inhibition aids this process to form sharp images. Lateral inhibition is the ability of a neuron to reduce the activity of its neighbours. In terms of vision this means ganglion cells receiving a moderate or low amount of light (yet still enough to generate an action potential) which contribute to blurry images, can be inhibited by neighbouring neurons which are receiving greater light stimulus. The brain is able to perceive sharper images from this information.

From the visual cortex, information is sent to the cortex in the temporal lobe; here it is connected to a response i.e. recognising a face, performing a task etc.

Studies have been conducted on animals to determine how they cope with monocular deprivation:

“It was confirmed that suturing the lids of one eye (monocular deprivation), until only 5 weeks of age, leaves virtually every neurone in the kitten’s visual cortex entirely dominated by the other eye. On the other hand, deprivation of both eyes causes no change in the normal ocular dominance of cortical neurones, most cells being clearly binocularly driven.

Kittens were monocularly deprived until various ages, from 5 to 14 weeks, at which time reverse suturing was performed: the initially deprived right eye was opened and the left eye closed for a further 9 weeks before recording from the visual cortex.

Thus, between 5 weeks and 4 months of age, there is a period of declining sensitivity to both the effects of an initial period of monocular deprivation and the reversal of those effects by reverse suturing.” Blakemore, C., Van Sluyters, R.C. Reversal of the physiological effects of monocular deprivation in kittens: Further evidence for a sensitive period (1974) Journal of Physiology, 237 (1), pp. 195-216.

As it states, this shows how important early development of the visual system is. Other experiments have also been conducted, where animals have been brought up in closed environments, which for example contain only vertical lines. After development, when the animal is released from this environment it is not able to process horizontal lines. It is therefore unable to perceive these lines.