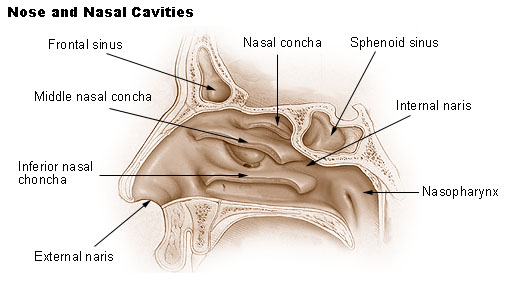 The sensation of smell is also referred to as olfaction. The sensory cells of olfaction are chemoreceptor neurones with a direct connection to the brain. The organ responsible for smell is the olfactory organ (‘nose’), also responsible for olfaction is the vomeronasal organ. Odour molecules, which stimulate the olfactory cells, can be either present in gases or dissolved in vapour droplets. Molecules present in gas are detected by the main olfactory organ, whilst those dissolved in liquid are detected by the vomeronasal organ.

The important structures of the olfactory organ are as follows:

Located ventrally to the nose, this small organ is able to detect dissolved odours (e.g. pheromones) this makes it important for signalling related to sexual behaviour. The vomeronasal organ is present in many animals including humans and although functionality in animals has been shown there is still debate over whether such functionality is exhibited in humans.

The pathway of transduction begins in the epithelial lining of the olfaction organ. Chemoreceptor neurones project from the epithelium into the mucosal layer of the organ. The projections are ciliated which increases the surface area of the receptors.

In the majority of these secondary messenger systems (a relay system where the activation of a receptor causes many changes in the cell, eventually leading to the desired outcome), the enzyme adenylyl cyclase is eventually activated. This enzyme converts ATP to cAMP. The production of cAMP opens Na+/Ca2+ permeable ion channels in the plasma membrane.

The unmyelinated axons of the chemoreceptors bundle together in small groups, they then travel through the olfactory foramina, (Small holes in the cribriform plate [part of the skull which makes up the roof of the nasal cavity]) to the olfactory bulb.