Leptospirosis is a zoonotic disease caused by the bacterial genus Leptospira. Leptospires are spirochetes, a group of Gram-negative bacteria with long, thin, spiral structures and an internal flagella used for movement. The size of a typical leptospire is around 0.1μm wide and 6-20μm long. This narrow, helical structure enables them to burrow in to tissues, within tissues they may adopt a more spherical or granular appearance.

Serovars are groups of organisms, categorised depending on the antigens they present on their surface. Therefore if a number of organisms within a Leptospira species share the same antigens on their surface, they will be grouped together into one serovar. Differences in surface antigens occur within the same species for example, within the pathogenic L. interrogans species, around >250 serovars have been identified worldwide.

Serogroups are clusters of serovars, as there may be hundred of serovars within a species, it is useful to group those together which share similar properties. Important serovars of L. interrogans include:

Each serovar is not limited to its primary reservoir host however. They be transmitted to incidental hosts fairly easily. Incidental hosts include humans, dogs and cats as well as other domesticated animals.

The transmission cycle of a typically Leptospira species is as follows:

Rodents can acquire Leptospira from the urine contaminated environment, thus creating a cycle of transmission

Transmission via direct contact usually occurs by urine which contains the Leptospira organisms. However direct transmission may also occur via veneral or placental transfer as well as bite wounds or the ingestion of infected tissue material. Crowding of animals (such as in kennels or intensive farming) will enhance transmission of Leptospira. Animals which recover from the disease, may still be infected, thus making them carriers of Leptospira which can still be excreted chronically in their urine. This continues the spread of infection

Transmission via indirect contact can also occur. Methods of indirect transmission generally requires exposure to contaminated sources such as; soil, food, bedding or water sources. The bacteria enters susceptible hosts from the contaminated source via damaged skin or exposed mucous membranes such as in the nose, mouth, eyes etc. Leptospira remains viable in the environment (still able to cause infection) for months, this further enhances transmission.

The optimal habitat for Leptospira depends on their environment, if aquatic, optimal conditions are stagnant or slow moving waters. If terrestrial, a neutral or slightly alkaline soil pH is preferred. However, organisms may survive transiently in undiluted acidic urine. A typical temperature range of 0-25C is preferred, this often leads to seasonal fluctuations in the incidence of Leptospirosis.

Leptospira enters the host by penetrating mucous membranes via vunerable areas such as damaged skin, eyes, nose or the mouth. Their helical shape and flagella aids in tissue penetration. Upon entering the blood system, they begin to multiply rapidly. The presence of bacteria in the blood is called bacteraemia. They are then distributed around the body via the blood stream.

Once distributed around the body, they then further replicate in target organs and tissues (including the kidney, liver, spleen, central nervous system, eyes and genital tract). The incubation period is around 7 days, this factor depends on the species and the strength of the host immune system however.

The damage done to the host’s organs and tissues is variable and depends on the virulence of the Leptospira serovar and how susceptible the host immune system is. The most serious of diseases occur in the incidental hosts, i.e. not the primary reservoir host. 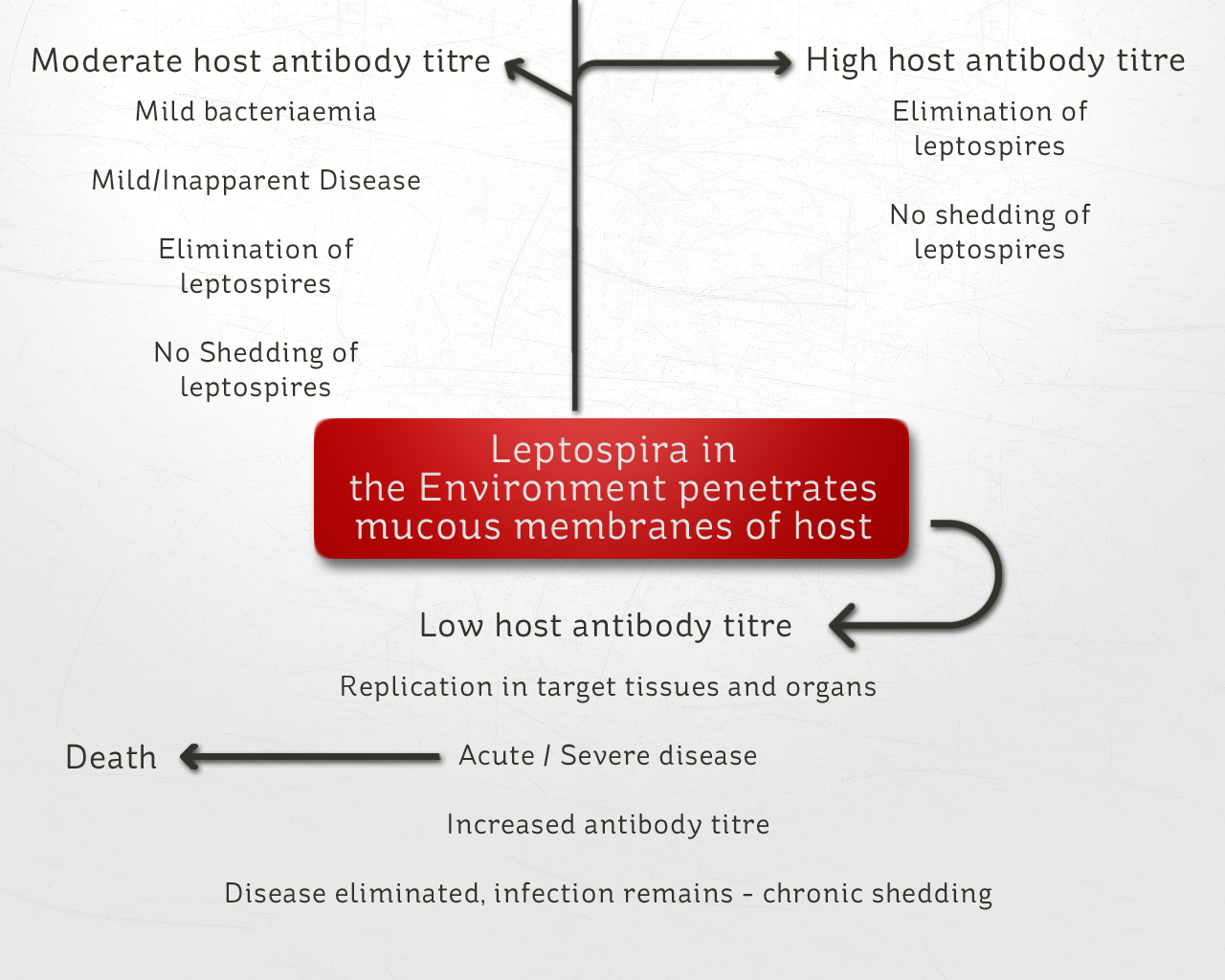 At present there are three different methods of leptospirosis diagnosis:

For dogs there are currently two forms of vaccine available:

Some preventative measures are also being taken in cattle to protect against Leptospira borgpetersenii serovar hardjo.

The widespread use of these bivalent vaccines may be responsible for the observed decline in classic canine Leptospirosis infections, however this vaccine does not provide cover for other serovars.

In the USA canine leptospirosis has been classified as a re-emerging disease due to the increasing amounts of newly diagnosed cases. This may be due to the prevalence of grippotyphosa, pomona and bratislava in wild reservoir species which are spreading Leptospira through the domesticated animal population. This is good reasoning behind the introduction of the quadrivalent vaccine as it protects against these serovars (not bratislava, however cases of bratislava are low).

In the UK, rural cases of canine leptospirosis are greater than urban cases, possibly hinting at a greater transmission via wildlife. This is a breakdown of serovar cases diagnosed in the UK: