Phenylketonuria (PKU) became a recognised clinical condition in 1934 when Norwegian physician Ivar Asbjørn Følling identified a link between mental retardation and elevated levels of phenylalanine (hyperphenylalaninemia). The elevated levels of phenylalanine (Phe) was a recognised consequence of a deficiency of the enzyme phenylalanine hydroxylase (PAH). The deficiency of PAH was shown to have a genetic basis i.e. the inheritance of a pair of autosomal recessive mutations from healthy parents. Inherited Metabolic Disorders such as these are now routinely screened for in newborns. The incidence of PKU is widely variable, with incidence as high as 1:2600 in turkey and 1:4,500 in Ireland or as low as 1:100,000 in Finland.

Normally serum Phe is converted to tyrosine by PAH, a multistep process then metabolises tyrosine to water and carbon dioxide, thus Phe is excreted from the body – this is not the case for patients where the PAH enzyme is defective or deficient. Elevated levels of Phe due to PKU, if left untreated, can cause problems with brain development. More serious cases can lead to mental retardation, seizures or brain damage.

Whilst there is no current cure for PKU, the best treatment is; early detection of the disease by newborn screening to minimize the damage caused by elevated Phe levels and maintaining safe levels of Phe by controlling intake of Phe from the diet. Low Phe foods include:

Trying to stick to a low Phe diet may mean low levels of certain nutrients and proteins – therefore they are often supplemented alongside the diet. A low Phe diet must be maintained from early childhood until around 18-20 years of age, by this time myelination of the nerves has finished and the patient is more resistant to the brain and nerve damaging effects of Phe. Whilst the diet cannot be completely abandoned it can be relaxed. Pregnant women should take extra care with serum levels of Phe as if serum levels are high, they can affect the unborn child increases its risk of mental retardation from early life.

Neonatal screening programs are now commonplace for the early detection of PKU as well as other hyperphenylalaninemic conditions. Such Programs require the use of blood spot testing, where a small sample of blood is taken from the heel of the infant. Multiple tests can then be preformed from this single sample. The tests for PKU continue to perform well, detecting double the amount of PKU cases that were originally expected. The success of the test is owed to the simplicity at which elevated Phe concentrations can be detected in the blood sample.

PKU arises due to mutations in the PAH gene, therefore to characterise the mutations the gene must first be located. The gene was found in the 1980s when a scientist (Woo, SL) cloned human cDNA then isolated and characterised the human PAH gene. The gene was found to consist of 13 exons (i.e. 13 coding sections) and was approximately 90,000 base pairs in length. It was located on the long arm of human chromosome 12.

PKU doesn’t arise due to a single mutation, there are hundreds of known and possibly many hundreds more unknown mutations which can arise in the gene. Each different mutation can give rise to varying forms of hyperphenylalaninemic conditions, some mild enough that they can be lived with unnoticed whilst in other cases, there is complete deficiency of the PAH enzyme.

Currently over 400 different mutations of the PAH gene have been identified. All of which affect specific exons or intron-exon splice junctions. Exon 7 of the PAH gene is where the majority of phenylketonuric mutations arise. However, it is unlikely that all PAH mutations will arise within the exon coding regions. It is more likely that there are some, as-of-yet uncharacterized mutations which affect the DNA sequences regulating the liver-specific expression of the gene. It is still unknown why there is such a high frequency of mutations occurring in the PAH gene.

The Structure of Phenylalanine Hydroxylase

The complete crystalline structure of PAH was identified in 1998. PAH is a tetramer, composed of 4 identical monomer subunits. Within each identical subdomain monomer, three distinct regions were identified:

All hydroxylases share a similar structure, see the figure below. Notice how the regulator domain differs in length. Also worth noting is that, the bacteria PAH has neither a regulatory or tetramerisation domain. Within the regulatory domains also lie a small number of phosphorylation sites which are susceptible to protein kinases. 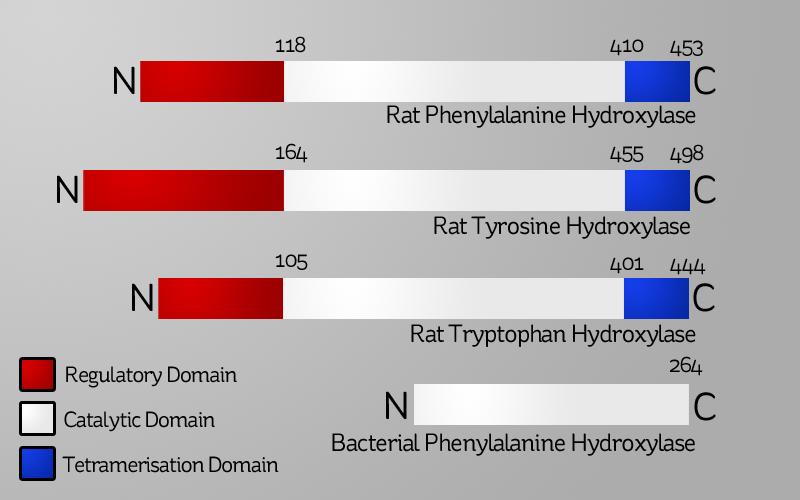 Mutations Cause Loss of Structure

Mutations in key amino acids (i.e. those which play a critical role in preserving the structure of PAH) can alter the binding point of phenylalanine. An unfolding of the catalytic core (the barrel region formed by the catalytic domain, within which iron is bound) can occur which thus leads to a loss of function. If PAH is unable to bind phenylalanine, then it is unable to metabolise it to tyrosine, thus phenylalanine is not broken down and the disorder phenylketonuria arises.

Some examples of human PAH mutations which cause a breakdown in structure are (nomenclature is: abbreviation of amino acid, then its residue number e.g. arg158 is arginine, 158 amino acids into the sequence):