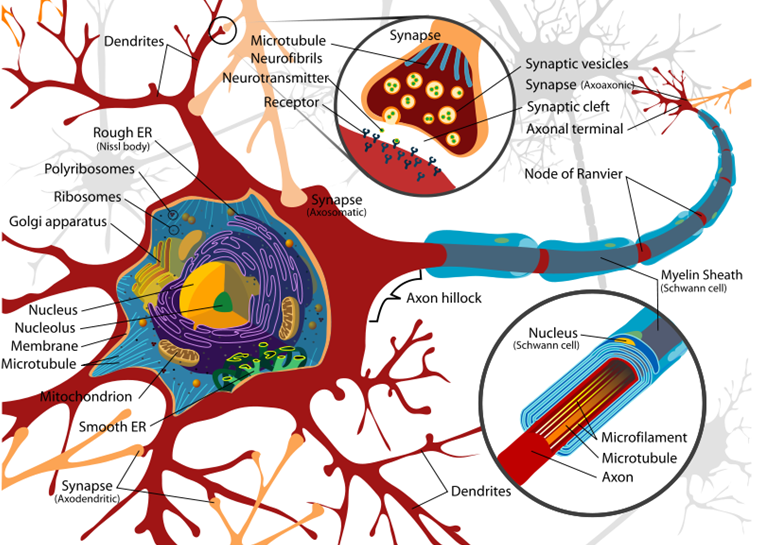 The axon and the dendrites of a neurone are too slender and transparent to be seen with normal staining techniques. Golgi’s method stains a limited number of cells at random in their entirety. (The mechanism is still not entirely known). Dendrites, as well as the cell soma, are clearly stained in brown and black and can be followed along their entire length. Enabling the tracking of connections between neurons and making the complex networking structure of many parts of the brain and spinal cord visible.

The Nissl stain uses basic aniline to stain RNA blue, and is used to highlight important structural features of neurons. The Nissl substance (rough endoplasmic reticulum) appears dark blue due to the staining of ribosomal RNA, giving the cytoplasm a mottled appearance. Individual granules of extranuclear RNA are named Nissl granules (ribosomes). DNA present in the nucleus stains a similar colour. The cell bodies and proximal dendrites may also be observed.

Once the antibodies have bound to the antigen, the specific antigen being probed for will then appear to fluoresce under specific light.

Much more powerful than light microscopes, electron microscopes can magnify up to 1,000,000 times. This enables neurone structure to be viewed in very fine detail.

The three basic types of idealised neurones include; bipolar, (Pseudo) unipolar and multipolar neurones, their name indicating the number of exits from the soma. Typically these neurones are found in different places around the body: 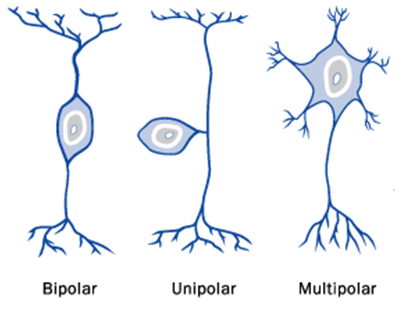 Glial cells are non-neuronal cells that maintain homeostasis, form myelin, and provide support and protection for the brain’s neurons. The four main functions of glial cells are to surround neurons and hold them in place, to supply nutrients and oxygen to neurons, to insulate one neuron from another, and to destroy pathogens and remove dead neurons. They also modulate neurotransmission.

Astrocytes are star-shaped glial cells in the brain and spinal cord. They perform many functions, including biochemical support of endothelial cells which form the blood-brain barrier, provision of nutrients to the nervous tissue, maintenance of extracellular ion balance, and a principal role in the repair and scarring process of the brain and spinal cord following traumatic injuries.

It is thought that astrocytes are able to take up glucose from blood vessels and redistribute it to neurones, giving them the nutritional support they require. They can also take up neurotransmitters and ‘detoxify’ them.

Microglia are a type of glial cells that are the resident macrophages of the brain and spinal cord, and thus act as the first and main form of active immune defence in the central nervous system (CNS). Microglia are constantly excavating the CNS for damaged neurons, plaques, and infectious agents. The brain and spinal cord are separated from the rest of the body by the blood-brain barrier, which prevents most infections from reaching the vulnerable nervous tissue. In the case where infectious agents are directly introduced to the brain or cross the blood-brain barrier, microglial cells must react quickly to decrease inflammation and destroy the infectious agents before they damage the sensitive neural tissue. Due to the unavailability of antibodies from the rest of the body (few antibodies cross the blood brain barrier due to their large size), microglia must be able to recognize foreign bodies, swallow them, and act as antigen-presenting cells activating T-cells. Since this process must be done quickly to prevent potentially fatal damage, microglia are extremely sensitive to even small pathological changes in the CNS.

Ependymal cells are epithelial cells that line the cerebrospinal fluid (CSF)-filled ventricles in the brain and the central canal of the spinal cord. Their apical surfaces are covered in a layer of cilia, which circulate CSF around the central nervous system. Their apical surfaces are also covered with microvilli, which absorb CSF. Ependymal cells can also produce CSF.